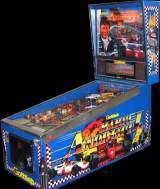 Mario Andretti was released in December 1995 in USA.

This was the last game designed by Jon Norris for Gottlieb.

Mario Gabriele Andretti (born February 28, 1940) is an Italian American former racecar driver, and one of the most successful Americans in the history of auto racing. He is one of only two drivers to win races in the 4 major motor racing categories : Formula One, IndyCar (USAC), World Sportscar Championship and NASCAR, the other being Dan Gurney. He also won races in midget cars, sprint cars and drag racing cars.