Tactical role-playing video game for the PS3 and the fourth in the Disgaea series by NIS (Nippon Ichi Software).

Combat is carried out in a turn-based strategy fashion. Allies can be deployed into combat, each with their own special skills and Evilities, additional abilities that are applied to every character. Enemies and allies may be picked up and thrown, just like previous Disgaea games. However, Disgaea 4 adds a new feature to its grabbing system, allowing any friendly character on the field to pick up another adjacent friendly character, and continuously pick up allies, in a tower fashion. When in the tower formation, the movement range of the stacked characters increase. The bottom character of the tower can also throw the tower ahead of him/her to further increase movement distance. Special abilities may be activated while in tower formation, such as specific team attacks and the ability to obtain items normally unreachable due to a wall.

Valvatorez owns a hub location known as Hades. Here, equipment can be purchased or sold, specific functions can be carried out, the player can travel to other locations to advance the story, and such. Unlike previous Disgaea hub towns, Hades comes with the ability to be rearranged to the player's liking, as well as changing the appearance.

As the player progresses through the story, Valvatorez's amount of captured land will grow, and as such, more characters can be befriended. Various items can also be placed on the land panels, as well as characters. When an item is placed on a panel, it may affect the layout or gameplay when a battle is initiated on that panel. For instance, having a certain item on a panel allows captured enemies to be Disciplined. 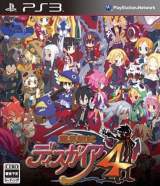