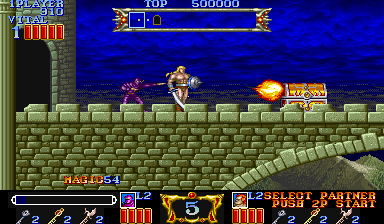 The land has been cast in darkness by Drokmar, who has been corrupted by the Black Orb; an artefact that promises immortality to anyone who comes under the influence of the orb's powerful sorcery. Two warriors set out to fight their way through fifty levels of platform beat-em-up, in order to destroy the orb - which lies at the top of the Dragon Tower - and free their lands.

Treasure chests litter the levels which, when smashed open, release treasure items, magic power-ups, keys, food and weapons. As players fight their way through the levels, they will come across a number of trapped prisoners. As long as the heroes are carrying keys, prisoners can be released who will then fight alongside the players, with each prisoner possessing their own unique attacks. Weapons and power-ups can be picked up to aid players in their quest and food can be found and eaten to increase player health.

As the players ascend the tower, they will be granted new magical weapons after each boss they defeat. The player's weapons are affected by a 'magic bar' that charges over time. When fully charged, the weapon has a powerful ranged attack, but when not charged only a close attack is produced. A magical staff will grant increased range attack ability. A magical blast may be generated by pressing the Attack and Jump buttons at once, but costs health.

There are multiple paths in the game, and two separate endings. Hidden doors can be used to skip levels when found - usually by attacking a wall or a particular spot. 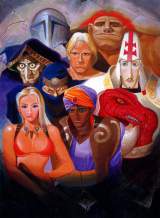