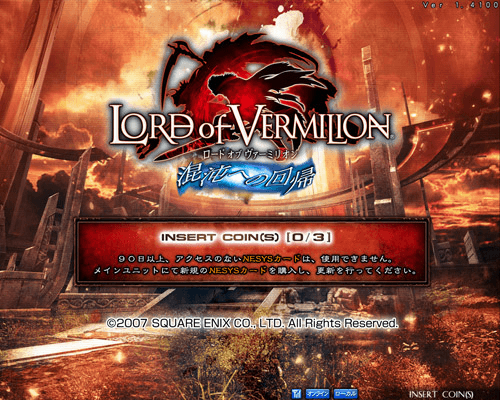 In ancient times, before the creation of the worlds lived God. He opened his heart and brought forth a vermilion stone in order to create seven different worlds. Whosoever held the vermilion stone held the power to create worlds, and would reign over the seven worlds as a god, the Lord of Vermilion. The seven worlds existed side by side in harmony for millennium, their inhabitants separated by boundaries and unable to interfere with one another... until the Great Collapse.

Ages later, the world, called the Land of Acheron, is still in turmoil. The six Lords of the six races sow strife across the land, warring for each other's Arcana. The player takes the role of a legendary warrior who holds the seventh Arcana and seeks to obtain the Arcana and upset the balance of the world, gathering an army of "Familiars" who hold faith in the legend of the Lord of Vermilion.