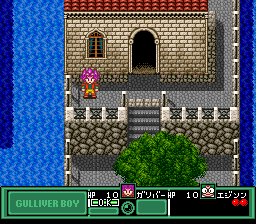 Gulliver Boy is an action/adventure game by Bandai and based on a Japanese anime produced in 1995. It tells the adventures of Gulliver, a young boy with magical abilities. The games takes place in a fantasy world heavily inspired by European influences where Spain (leaded by the evil Judo) plots to take over the World and steal all the mysterious Blue Stones. The game begins in Venice (Italy) after the city was devastated by a terrible flood. There, Gulliver meets his cute and blond friend Misty and the genius Edison, a rather clever and creative kid always creating crazy and often useful inventions. But soon an evil moon-shaped character appears and kidnaps the poor girl and takes her off to an unknown location. Our friends have now to get her back and find out what is going on. Once the introduction cut scene is over, our heroes can freely walk around town. Gulliver is equipped with a magical glove from which a beam of blue light can be charged up and used to strike enemies. Edison has a limited, yet renewable, stock of bombs. Interestingly, only one character can be played at the same time and players get to switch between them at the press of a button. When a character is not in use, he will slowly regain life and, in the case of Edison, bombs. Our heroes can also level-up. Defeated foes sometimes drop experience icons. Those are usually worth ten points and are color coded (they indicate who can use the points - pink for Gulliver, green for Edison and yellow for Misty). Finally, the game also has usable items such as Hearts (life) or Potions (health).