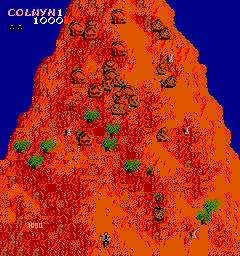 The player must accomplish a task in each of the five games with eight levels of difficulty in each. All eight levels can be reached in one task based on the time spent performing that task (amount of time spent on that subgame). The total number of lethal characters on the screen at one time increases as the levels increase.

FROM THE SKY WILL COME THE BLACK FORTRESS. FROM THE FORTRESS WILL COME THE SLAYERS, TO DEVOUR THE PLANET OF KRULL. THEN SHALL A GIRL OF ANCIENT NAME BECOME QUEEN, AND THE KING SHE CHOOSES SHALL RULE THE PLANET.

The planet Krull is threatened by the Beast. His army of Slayers has brought terror to the land. Colwyn must stop this terror and save the land and its people. On the day Colwyn is to wed the Princess Lyssa, the Slayers, army of the Beast, kidnap her to become the Beast's bride. Colwyn must reach the Black Fortress and reclaim his Princess. He who marries the Princess shall be king. The Beast must not be allowed to rule the planet.

A prophet acquaints Colwyn with the magical properties of the glaive, a five-bladed sword, which Colwyn must acquire. To accomplish this task, he must climb the mountain and collect the five individual blades of the glaive in order to assemble the weapon. The blade is picked up by touching Colwyn to the blade. Boulders are fatal and must be avoided. The weapon joystick is not utilized in this subgame. The player is awarded 1,000 points for each blade picked up. Points are also awarded for placing Colwyn in a dangerous position in front of one or more boulders.

During his travels to discover the Black Fortress, Colwyn comes upon an army of eight men that he befriends and recruits to help him in his quest to destroy the Beast so that Krull can be safe from his evil.

With no intentions of losing his newly acquired bride without bloodshed, the Beast orders an army of Slayers to stop Colwyn and his friends. Forging through the quicksand-riddled swamps, Slayers materialize from the soil and Colwyn prepares for battle. In the second subgame, Colwyn must save as many friends as possible while killing all of the Slayers. The friends are saved by touching them and the Slayers are destroyed by the glaive. The Slayers themselves and their spears must be avoided. The game begins with eight friends. The number of friends saved is the number of friends carried over into future subgames. The friends can eliminate the Slayers with hand-to-hand combat but can also be destroyed themselves. Receiving three blows either by hand-to-hand or by the Slayers spear is fatal to the friends. The subgame ends when there are no longer any friends to save and all of the Slayers have been eliminated. Avoid quicksand, as it slows Colwyn's attack. Each friend saved awards 1,000 points (maximum 8,000 points) and 100 points for each Slayer the player eliminates.

Now inside the Black Fortress, Colwyn secedes from his friends in order to rescue the Princess Lyssa. He finds her in a large cave carefully guarded by the Beast. He knows that the only way to reclaim his bride and conserve the planet is to forge into battle with the Beast. In the fifth subgame, the player moves Colwyn towards the Princess in order to reach her. As he progresses, the Beast attempts to stop him by throwing fireballs at him. The fireballs must be avoided or destroyed by the glaive. If not destroyed, the fireballs will ricochet off of the walls. Destroying a fireball awards the player 100 points multiplied by the number of fireballs in flight. The Beast is momentarily stunned when hit with a glaive and awards the player 100 points. The Beast cannot be destroyed and the player must avoid touching him. When Colwyn reaches the Princess, his friends, following the pandemonium of the battle, appear and chase the Beast off, awarding 1000 points per friend. The total number of friends in this subgame is equal to the total number of friends saved in Subgame 2.

this game is known in Japan as "Ginga Densetsu Krull" (translates from Japanese as 'Galactic Legend Krull').

Krull was designed and programmed in 10 months. Chris and Matt started on it in early May of 1982 and finished in February of 1983. It is Gottlieb's first movie-themed video game.

Jason Curran holds the official record for this game with 421,590 points.

About the movie : Krull is a world deep in a far-away galaxy, a culture of myth and magic. The kingdoms of Krull, in the past divided by wars, have united to battle the terrible enemy who seeks to dominate them... the Beast. He is a powerful dark force who has returned from Krull's ancient past, determined to destroy all those who oppose him.
Krull is a $25 million dollar fantasy adventure from Columbia Pictures. To create this special-effect epic, Columbia Pictures has assembled the industry's top talent, people who helped bring Superman and The Empire Strikes Back to the screen. Like those top-grossing films, Krull will appeal primarily to young people under age 25, the most important demographic group for game operators.

* Hidden Heads : Press and hold down the Select button (which is utilized in the operator mode) and reset the machine. 63 Black & White faces representing 'Bob' Dobbs will bounce around the screen.