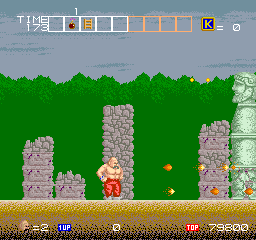 Karnov is a 2-D, platform style game. You control Karnov through 9 scenes. Each of these scenes gives you piece of a map (except the first scene). Get all the pieces of the map and you get to the treasure. Your journey won't be easy though. You will be going through some rough environment such as towns, forests, oceans, and caves. To further make your travels a hazard, different enemies attempt to end Karnov's life prematurely and prevent him from getting to the treasure. To aid Karnov in his adventures, he has certain items that he can draw from his inventory. In addition, there are other items that can make Karnov a potent foe of those wishing to harm him. You must complete each scene in order to advance to the next scene. All in a days work of a hearty explorer.