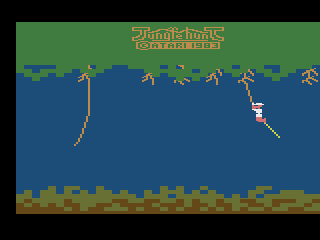 The object of JUNGLE HUNT is to rescue Sir Dashly's kidnapped mate, who, after hours of valiant fighting, was overpowered by two man-eating (and woman-eating) savages.

To rescue Lady P., you'll have to make your way past four sets of obstacles: the vines of the Forest, the crocodiles of Reptile River, a landslide of bouncing boulders, and the spears of the two masked cannibals. You'll score points for each obstacle Sir Dashly successfully overcomes; you'll also score bonus points for rescuing Lady P.

Since jungle hunting is a dangerous business, you are given five lives at the start of the game. The number of lives remaining is shown on the upper left of your screen. At 10,000 points you are given one extra life - if you survive that long!

When you begin the game you are given 500 seconds to reach Lady Penelope. A timer counts down the seconds until you reach her. You'll score more bonus points for rescuing her quickly, so don't dawdle while you're jumping vines or avoiding crocodiles.

The obstacles you'll encounter on your adventure are:
DEADLY
FOREST

The Deadly Forest is a swinging place once you get to know it. Here you'll test your coordination and timing as you jump from vine to vine. Since some vines swing faster than others, you'll have to time your leaps carefully. Make a wrong move, and Sir Dashly is finished !

The Reptile River is filled with schools of cantankerous crocodiles. Make Sir Dashly swim out of their way or fend them off with his knife. Beware of any crocodile with its mouth fully open - his knife will be useless against it.

Use your Joystick to steer Dudley underwater, but keep your eyes on the air meter at the top of your screen (see Figure 1). If Dudley is still underwater when the meter runs out, he'll have to breath water - and you'll lose a life!

After you successfully cross Reptile River, you'll encounter a landslide of tumbling boulders. There are two sizes of boulders: small rolling rocks and larger bouncing boulders. Leap over the small rocks to avoid getting crushed. Larger boulders are harder to avoid - you'll have to leap over, run under, or duck beneath them to keep out of their way.

You're finally within reach of Lady Penelope, but she's being guarded by spear-wielding savages. You must guide our hero over the spears of the savages and run to the waiting arms of Lady Penelope. Watch out for the tips of the spears. They're poisoned !

After a tearful reunion with his beloved wife Sir Dashly returns to the Deadly Forest for the next level of play. The game becomes increasingly difficult as you move on to higher levels. You can continue to play until you run out of players, or until the timer runs out.