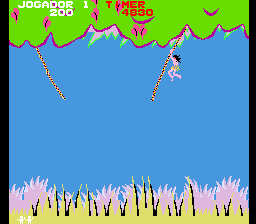 Export release. Game developed in Japan. See the original "Jungle King" for more information about the game itself (except for differences and ports listed here).