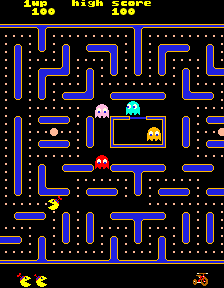 One of many sequels to the legendary "Pac-Man", Jr. Pac-Man features the character of Pac-Man's son. For the first time in the series' history, side-scrolling mazes were introduced, with each maze being two screens wide.

This time, the mazes have no exit tunnels through which players can make an escape. The bonus items that appear move around the maze and are now something of a mixed blessing, as not only will they destroy any Power Pills they come across, but they will also turn any normal dots they pass over into large dots that slow the player's movements considerably, but are worth more points than normal dots if eaten by the player. Any mutated dots in the maze will disappear if the player loses a life.

The Pac character is once again pursued by four ghosts (Blinky, Pinky, Inky and Tim) in his quest to eat all of the dots in each maze. And, as before, numerous Power Pills litter the mazes that, when eaten, allow Jr. to eat the pursuing ghosts.

Act I - Jr. Meets Yum-Yum : Jr. Pac-Man steps outside his home to play. He spots Yum-Yum beyond the fence in his yard and goes outside to meet her. Blinky, hiding in the shadows, comes out from hiding to catch Jr. However Ms. Pac-Man, keeping a watchful eye over her child, sees the commotion from her window and runs out to the yard to eat a Power Pill and chase both ghosts away while Jr. returns to the safety of home. This intermission is played after Round 1.

Act II - The Gift : It seems that Jr. can't get the enchanting young ghost out of his mind, so he proceeds to bring a balloon to her as a gift the next day. Excited to see her, he meets her on a bridge and hands her the balloon, when we catch a glimpse of Blinky lurking behind a bush. This intermission is played after Round 3.

Act III - They Escape : Blinky moves from one bush to the another, startling Yum-Yum into releasing the balloon. Blinky attempts to capture Jr. once and for all, but once again, Ms. Pac-Man comes to the rescue. Blinky chases her off to the left, while Jr. Pac-Man and Yum-Yum escape to the right. Once alone, they gaze in to each other's eyes and fall in love, with hearts appearing all around them. This intermission is played after Rounds 5, 7, and 9. 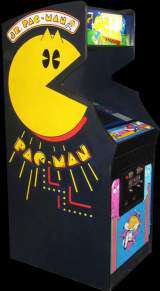 Game was available either as one of 2 kits to update a "Pac-Man" upright cabinet or cocktail table cabinet. It was also available as a dedicated game using a "Mappy"-style cabinet.

Jr. Pac-Man was released in October 1983 in North America.

Jr. Pac-Man runs on a modified "Pac-Man" hardware, with additional horizontal scrolling support. This was the first "Pac-Man" game in which the maze is larger than the visible area; requiring the screen to scroll.

There are a number of hidden bonus objects that were never used by the developers. To see them, set 'CHEATS' to 'Always have blue ghosts'; play a game, repeatedly eat the ghosts until you get past 1,600 points. The game was coded to deal with such high bonus values and assigns a hexadecimal value to the score value after 1,600. The hexadecimal scores equate to a graphic in the game. After eating somewhere in the neighborhood of 20-30 ghosts consecutively, the hidden objects will appear. There is a rattle, a baby's dummy, a cowboy hat and a skateboard.

Abner Ashman holds the official record for this game with 1,500,000 points on February 2, 2002. In the game where he "officially" got this record, there was a power outage that shut down his game at approximately that score...and he still had not lost a man up to that point!

A bootleg of this game runs on the "Pengo" hardware.

The first maze, which has 548 dots and six Power Pills, offers a good mix of straight-a-ways and islands. The two power pills on either side of the ghosts' den cannot be destroyed by bonuses, so try to save them for later in the stage. The ghosts move slow enough that you can plan out your strategy and wait by power pills for ghosts to gather nearby before eating them.

The second maze has 560 dots, six Power Pills, and features more long stretches than the first maze, but there are many escape routes, so you shouldn't worry about getting trapped. Use the 'staircase' section of the maze on the far ends to put distance between you and any trailing ghosts. It's possible to 'trap' the ghosts so that you can complete a lot of the maze without them chasing you. Position Jr. to either the far left or far right hand side of the maze; thus causing the center of the maze to scroll off-screen. You should see the ghosts in the corridors above the ghosts' den; they will stay in those corridors as long as you are on either the left or right hand side of the maze. This works because the game has logic to reverse the ghosts' direction when they go off screen.

The third maze has 526 dots, six Power Pills, and features small circular sections that you should approach with caution. It can be hard to read which directions the ghosts will move in around them and lead to unavoidable collisions. By this maze, the ghosts are speeding up, so take the time to cross from one section of the maze to the other to prevent the ghosts from surrounding you.

The fourth maze has 526 dots, six Power Pills, and features islands on the bottom that can be both helpful and harmful. They allow you multiple paths to take in order to escape from one ghost, but they also provide multiple pathways for a number of ghosts to surround you. Clear as much of the bottom sections as you can before you eat the Power Pill. Then use the Pill and eat any ghost in the area before time runs out. Then finish the section if possible before moving on.

The fifth maze has 528 dots, six Power Pills, and features islands that are scattered throughout. Cross back and forth across the entire maze to prevent the ghosts from ganging up on you in any one section of the maze. Power pills are becoming less effective at this point. Don't sacrifice yourself trying to stop a bonus item from destroying a power pill.

The sixth maze has many S-turns that offer the ghosts multiple opportunities to trap you from either end. Keep the ghosts behind you by crossing back and forth. To make matters worse, you only get four Power Pills instead of six. Aside from the Power Pills, there are a total of 512 dots in this maze. Don't let the bonus item transform too many of the dots into mutated dots in this maze, or you will have a harder time avoiding ghosts while being slowed down by the large dots.

The seventh and final maze is by far the most dangerous maze to Jr.'s survival. The center is relatively safe, but the sides of the maze are deadly. There are 540 dots and only four Power Pills in this maze. The Power Pills are situated in odd corners. The far path around the outside of the maze is considerably dangerous as it is easy to get trapped trying to clear it. And the Power Pills simply aren't effective long enough to keep you safe. The smaller sections between the side Power Pills is also easy to become trapped in. Only enter if the coast looks clear, and make sure that you have an exit strategy if a ghost decides to enter this small section with you. For all of your planning, success in this maze depends on a considerable amount of luck.