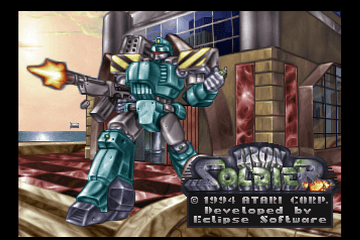 Industry has taken over the planet. Three-quarters of the Earth's surface is covered with concrete and steel cities and wastelands. The Iron Fist Corporation (IFC) has used military force to conquer national governments and create a worldwide military dictatorship.

Recently, the IFC developed a new weapon for use in urban areas: a 42-foot tall piloted robot, known as the Iron Soldier (or, IS). With such a weapon, they will have no trouble maintaining their hold on the populace.

However, an organization has been formed to stop the IFC. This group, known as the Resistance, has even managed to capture an early production model of the Iron Soldier unit.

This is where you come in. As a member of the Resistance, your job is to pilot the Iron Soldier in a one-man war against Iron Fist. The fate of the world rests on your shoulders, but at least your IS's shoulders can mount rockets...

* GETTING THROUGH A MISSION
- Read the Briefing carefully so you know what you must do to complete a level. It may take you a few tries before you figure out exactly where and what your objectives are.
- Choose your weapons carefully.
- Try breaking open buildings and remember what kind of crates are in them if any.
- If you can't solve a mission, try taking a different route. There are many ways to go, some are easier and faster than others.
- Enemies that move quickly are easier to hit if you fire just in front of them, so they move into your shots. This is called leading the target.

* FIGHTING TANKS
- Use buildings for cover. Don't stand out in the open, or you will be surrounded.
- You can often kill tanks by hiding from them until very close, then stepping on them!
- You can kill tanks at long range with the rocket launcher - aim just a little bit high when doing this.
- You can shoot tanks at close range with the Gatling Gun, but aim low to stop any rockets they may fire.
- When fighting the Heavy Tank, avoid it until it is close, then cut it up with a Chain Cutter.

* FIGHTING HELICOPTERS AND V.T.O.L.s
- Use the gatling gun at close range. Hide in skyscrapers, and watch your radar. When they come around the corner, blast 'em!
- If you catch a V.T.O.L. on the ground, don't get too close - shoot it with the Rail Cannon or Rifle before it takes off.
- Try to get the V.T.O.L.s to drop bombs on fuel tanks - they'll blow themselvers up!
- Be sure to kill V.T.O.L.s before they get too close.

* AVOIDING ROCKETS
- You can shoot down rockets with the Gatling Gun, but it is safer to dodge them.
- Watch the rockets on the radar and move perpendicular to their flight path to avoid them.
- Be sure not to get too close to rocket launchers.
- The rail cannon will destroy rocket launchers at long range. Rockets do a lot of damage, so be careful!

* FIGHTING SHIPS
- If the ships are close enough to shore, use grenades.
- Ships have good side armor, so rockets aren't too effective.
- The ships fire at you if you get close, but it only takes two well-placed grenades to destroy a ship. Otherwise, it takes about 15 rockets.

* FIGHTING IS UNITS
- Try to use cover.
- If you have rockets, try to fire them when the enemy IS is not shooting at you.
- Throw grenades as accurately as possible, leading the target some since the Grenades are slow.
- Most IS units stop firing if you get in close enough, but watch out for their punch!
- Use your fists or the Chain Cutter at close range, and back up a little bit when you think it's going to punch you. Then move back in again if it turns away from you.