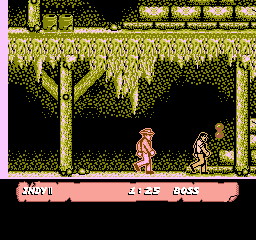 The search for the Holy Grail is on! Hitler must have the Grail to secure his domination of the world and is willing to do anything to get it. Indy's father, Dr. Jones Sr., was close to finding the Grail, but was kidnapped. Now Indy must save his father and find the Grail before it's too late! Explore six treacherous levels of excitement in a race against time, evil and ancient mysteries!

Released in December 1993 in the USA.
SOURCES
Game's ROM.