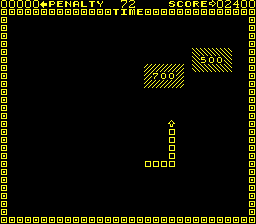 HUSTLE is a 1- or 2-player video game which challenges players' reaction time as they attempt to build up a high score. The object of the game is to maneuver a moving arrow into targets which appear randomly on the screen. Each arrow is accompanied by a tail, which can be used to block the opponent from scoring targets.

CRASHES : A crash (accompanied by a loud boom sound) occurs whenever a player hits anything other than a target. The three obstacles a player might hit are one of the screen boundaries, the other player's tail, or his own tail. Whenever a crash occurs, the opponent scores 400 points PLUS all target values on the screen. If any mystery targets are on the screen during a crash, their values are revealed, and they are awarded to the opponent. All mystery targets whose values are revealed as the result of a crash are scored positive for the opponent.

GAME SPEED : The game begins with the players moving at a moderate pace. Every time a target is scored, the pace picks up slightly. After ten targets have been scored without a crash, the pace stays at a maximum rate. Whenever a crash occurs, the pace reverts to its initial moderate value, and increases with each score, as before.

TAIL LENGTH : Whenever a crash occurs, both players' tails grow longer. The game plays quite differently as it progresses. At the beginning of a game, both players have short tails and are highly maneuverable. At this stage the game is a "foot race" to score the targets. As players crash and tails get longer, a blocking strategy is added to the race for the targets. This constantly changing nature of the game is designed to provide long-lasting appeal, and insure a long earning history.

SINGLE PLAYER : HUSTLE has been designed to be just as exciting for one player as it is for two. A single player plays against himself, and not against the computer.

The single player game is initiated by simply pressing the ONE PLAYER START button instead of the TWO PLAYER START button after inserting a coin. The controls for one player are located on the right side of the control panel. The game plays the same as for two players, with these exceptions :
1. There is a single arrow and tail, instead of two.
2. Crashes are scored as PENALTY points, with the same score as in the two player game. That is, a crash scores 400 plus all on-screen targets into the PENALTY score.
3. At the end of the game, the PENALTY points are subtracted from the player's score.

The object of the single player game is to rack up as many points as possible. The game action is the same as the two player game, with the lengthening tail and the accelerating pace. 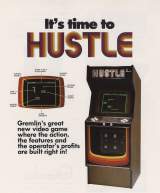