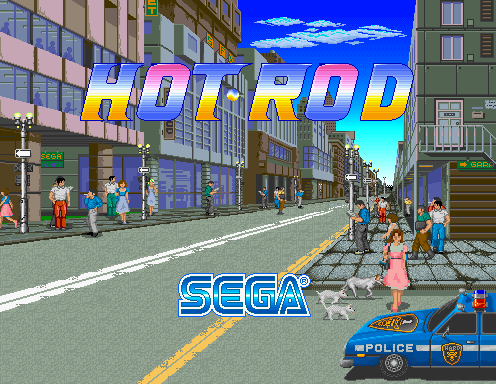 Hot-Rod is a scrolling top-down racing game in which up to four players race each other over a variety of different surfaces on a selection of narrow, twisting roads. Each player's vehicle has a fuel (gas) meter that constantly depletes as the race progresses. Extra fuel and bonus pick-ups are placed at regular intervals on each track and can be collected by driving over them. If a car runs out of fuel it is automatically disqualified from the race.

During races the track scrolls to follow the current race leader. If the last-placed driver falls too far behind the leader and allows the scrolling area to catch up with them, their car is automatically transported further up the track, resulting in a fuel penalty.

There are always four cars competing in each race, with computer-controlled cars replacing any positions not filled by human players. Any driver finishing in the Top three is awarded bonus points, with the amount determined on whether they finish 1st, 2nd or 3rd. These points can be used to buy car upgrades in the garage shop that appears at the end of every race. The upgrades available are; engine, tire, wing and bumper. These affect speed, handling and durability. Particular attention should be paid to tire choice, as different tires are suited to specific race surfaces, with the next stage's surface being visible as the car enters the garage. Players can equip either a front or rear engine but not both at once. It is also impossible to have a spoiler and a rear engine equipped simultaneously.

There are a total of 30 different tracks set across ten different environments, including busy highways, dirt roads, a beach-side course, a mountain course, farmlands, snowy terrain, a desert, a construction zone, a shipyard and city streets. There are three races per environment with every third race ending with a victory ceremony in a stadium, before play moves on to the next environment.