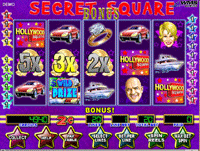 The HOLLYWOOD SQUARES themed slot series is back with another crowd-pleasing game, Prize Spin!

The title feature of this slot game will delight players while they win bonus credits! Prize Spin features a mechanical top box that shows a circle segmented into pie-shaped wedges. The wedges revolve and stop on one of three sides to reveal awards. Seven of the wedges contain prizes and one wedge contains multipliers! To play this exciting bonus, the player will choose two of the seven prize wedges. The player will make this selection on the video screen, and the corresponding pieces on the top box will light up and move back forth. One by one, the pieces will come to a stop, revealing prizes. After a brief pause, the prize multiplier wedge stops on a side, revealing a 1x, 2x, or 3x multiplier.

The celebrity spin bonus is triggered when three or more scattered TV set symbols appear on the reels. The screen will change to show a large television set, showing the HOLLYWOOD SQUARES set. The player is prompted to choose a celebrity, and is awarded 3 to 10 celebrity spins. Each of the celebrities' squares spins to reveal a celebrity or a prize. After each spin, an X is placed over the revealed celebrities and prizes; three X's in a row form a Tic-Tac-Toe, and the player is paid for each Tic-Tac-Toe based on the paytable shown to the right. If a prize is won at any time during the spins, a prize menu will appear at the end of the bonus round. The wedges in the Prize Spin top box are set to random-sized awards, and the lights surrounding them blink on and off, highlighting random prize amounts. The player will select one of the prizes in the top box by pressing a large button in the center of the screen. The player will continue pressing the button and receiving prizes until they have exhausted all of the prizes they won during the celebrity spins.

HOLLYWOOD SQUARES Prize Spin will leave players reeling with all of the bonus credits they have won!