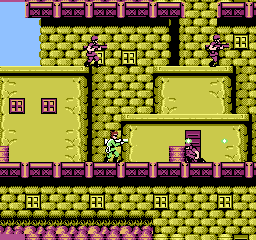 Hitler no Fukkatsu is an action game by Capcom and is technically a reboot of the arcade game of the same name. The Nazis are back - they have survived the war and, led by their supreme leader Weizmann, they have now come up with the most evil and horrific plan in history! Hitler, the man who the allies thought was dead, has been revived and his fractions of hell are about to take over the world once again. The allies decide to send one of their best men, Super Joe, to counter the threat - but he is soon captured and Radd Spencer is dispatched to rescue him and complete the primary mission. Radd is not your typical lone soldier - he is equipped with a gun and a grappling hook that he can use to latch onto ledges and swing across gaps and obstacles. This feature is at the core of the gameplay and although Radd can't jump, he can use the hook to make his way through the enemy's fortified defenses. The game is not a straight forward affair thought - the player is presented with a map of the enemy territory where white locations represent enemy action areas, and red ones non-hostile neutral zones. The action scenes are where the meat of the game lies - they feature impregnable enemy fortresses the player must infiltrate in order to find and destroy bosses and, most importantly, power generators. They also feature communication rooms where the game's intricate story unfolds. The neutral zones give the player information about the coming levels, but also special items such as new communicators and more powerful weapons. Finally, the map also features enemy army trucks that trigger short top-down action phases (only places where the player can collect precious continues!). Finally, although Radd can find upgrades and power-ups, his health increases with an experience based system and bullets left behind by enemy soldiers act as experience points. Hitler no Fukkatsu consists of thirteen action-packed levels and is single player only.