One symbol on the middle reel that is always wild when it appears on an active winline.

On the third reel there is a chief's head symbol. When that symbol lands in this position it will activate the chief's head feature.
The accumulated value of wins forms a starting point for the top game gamble.
A Barcode (triple,double and single bars on the winline in that order) gives six combinations (via the hold buttons) which will give 6 different features. 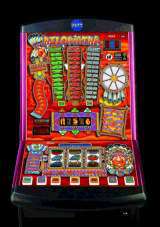 Hints:
*Watch out for vertical wins!!
*Build up the arrows to the super knockout...get more than you bargained for!
*What happens when the hilo number matches the feature number....?
*A bonus reel blast can happen at any time!
*Nudge and Hold can help you get a win.