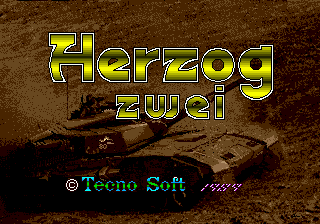 Real-time strategy video game. The player directly pilots a flying, transforming mech, a multi-role vehicle suited for utility and combat. Through the mech, the player purchases surface combat units, airlifts them across the battlefield, and issues them orders. These command activities can only be performed through the mech. Vehicles follow their assigned orders (patrol, garrison, capture base) until they either run out of fuel or are destroyed. Tactical re-deployment (mission reassignment, vehicle repair) involves a great deal of micromanagement, due to the required involvement of the mech.

Both the player's ground forces and the mech have finite fuel and ammunition. A prolonged engagement requires considerable micromanagement, as vehicles will not auto-repair, and the fragile combat-supply vehicles have a limited radius of service.

With a total of eight different types of land units to purchase, the player can determine the composition of his army. Each combat vehicle type represents a tradeoff between speed, anti-air, ground-attack, and cost. Units are assigned mission orders from a menu selection: fight from a fixed position, patrol this area, fight in fixed radius, go to/attack/occupy intermediate base. New orders can only be issued during the airlift, and every time a unit's mission orders are reassigned, a cost is incurred.

In addition to the player's main base, there are nine permanent outposts scattered across the battlefield. These indestructible buildings are the only production resources on the battlefield. Once under a player's control, an outpost generates additional revenue (for purchase of units) and serves as a remote base of operations (repair/refuel, pick up delivery of purchased unit.) A key strategy is to capture as many outposts as possible or deny enemy use through nuisance actions.

Herzog Zwei supports both single-player mode against the AI, as well as a two-player multiplayer mode. In single-player, the entire screen is devoted to the human-player's field of view. The game partially offsets the AI's inherent weakness by increasing the armor and offensive damage of computer player side with each advancing level. 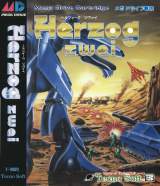