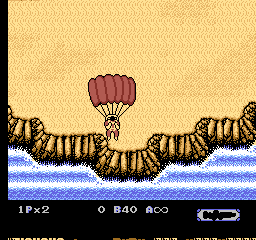 Heavy Barrel is an overhead action game by Data East and conversion of their own arcade game originally released in 1987. The adventure begins conventionally enough - a group of terrorists has gained control of a sensitive nuclear site and must be stopped. Players must infiltrate the underground facilities and terminate the unabated terrorist threat. They come equipped with a standard Machine Gun and a set of Grenades - more weapons can be picked up along the way such as the wide 5-Way Rifle, the Flame Thrower or the lethal Laser Gun. They all have limited ammunition and must be recharged for maximum effectiveness. Different grenades are also available such as the twice as powerful Super Grenades, the rotating Ion Balls or the Smoke Bombs. But our heroes have a secret weapon, the Heavy Barrel. This prototype gun was taken apart by the scientists who built it and the pieces scattered throughout the underground complex. Once the gun is reassembled, its amazing powers can be unleashed for a short amount of time and another one needs to be assembled as soon as it runs out of power. Weapons, special items and the Heavy Barrel's pieces are all hidden inside small locked crates that can only be opened with red keys carried around by red terrorists. The game features more crates than keys and this short supply forces the player to strategically decide of which ones to open, and which ones to pass on. 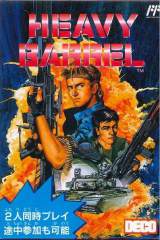