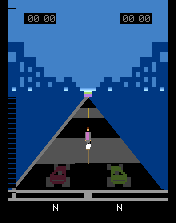 Heart Like a Wheel is a nice looking racing game in the style of Activision's Dragster (which is really a clone of Atari's Drag Race). However unlike Dragster or Drag Race which are viewed from the side, this game is viewed from behind. The perspective is similar to that of Activision's Enduro, right down to the vanishing point on the horizon.

The gameplay is quite similar to Dragster in that the player must rev his engine and change gears as fast as possible without blowing the engine. However unlike Dragster the player actually has control over his car and can steer it around the lane. The faster the player goes, the further the car will move into the horizon and the harder it is to keep from crashing into the sides of the lane. Careful steering is a must if you're going to win a race in this game.