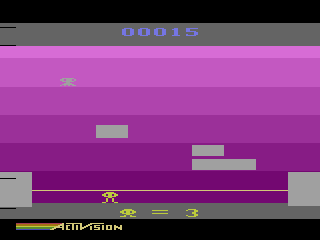 In Hard Head you control a little Space Invader guy who must use the blocks at the bottom of the screen to build a tower and escape. As the blocks come rolling down the conveyor belt, you must jump up and bump them so they land somewhere on the screen (the blocks don't count if they go off the edge of the screen). The movement scheme in this prototype is a bit unusual as the longer you hold the joystick in a direction, the faster your little guy will run. Although this is very realistic, it is a bit odd for a 2600 game and may take some time to get used to. Once you have constructed a nice little tower, you must carefully jump on the conveyor belt and them climb the tower. Be extra careful on the conveyor belt, as touching the blocks will cause your little guy to be flattened.

Starting on the second level, you'll undoubtedly notice that some blocks will flash yellow or blue. These colored blocks are actually part of an elaborate timing/bonus system. The yellow block (which I call the Bump block) moves up the tower at the rate of once block a second, while the blue block (which I call the Bonus block) moves up the tower one block every time the yellow block reaches the top of the screen. If your character happen to be on the tower when the yellow block touches him, you will be knocked down one level (slowing your decent up the tower). However if your character touches the blue 'Bonus' block, you will gain bonus points as long as he remains on the block. However greed can be a dangerous thing as the tower will collapse after a certain amount of time (determined by the difficulty level). When the warning alarm sounds, you have exactly 10 seconds to hightail it up the tower or you'll be crushed under the debris.

Starting on the third level, strange aliens creatures will begin to fly around the screen. You can destroy them by hitting them with a flying block. Smashing aliens is worth 180 points, while simply bumping a block will net you 5 points. If you let the octopus alien reach the bottom of the screen he'll start breeding and clog the area. However since you can simply knock the extra aliens out of the way so he's not a really big problem. If you're really tricky you can use the blocks to fence in the alien and keep him form reaching the bottom, but this is more trouble than it's worth. Starting on the fourth level a squat looking alien with two legs will rapidly move down the screen and try to catch your guy at the bottom of the screen. When this happens you'll need to jump on the conveyer belt temporarily to escape until he disappears. Unfortunately this alien is immune to the blocks so all you can do is avoid him.