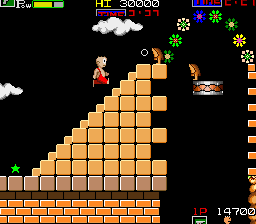 Players control the character Hard Head, who can use a bubble gun to entrap enemies, then jump on their heads to defeat them. Often compared to Nintendo's Super Mario Bros., the game met with some favorable reviews on release and its offbeat sense of humor has been noted. Enemies include monsters and ducks. Hard Head can use his head to break bricks, some of which contain power-ups. Levels are completed by finding a soccer ball and kicking it through a goal to finish the stage. There are 16 levels in total. A two-player simultaneous mode is also available, allowing another player to control the second Hard Head twin.

SunA subsequently released a sequel to the game, Hard Head 2, which featured the same characters but different gameplay.

Classical music is extensively used as the soundtrack for this game.

A bootleg of this game is known as "Popper (Unknown)".