Have hammer, will travel! With only your trusty mallet to help you, you must repel all the attackers from your western fort, pirate ship, castle and space station! 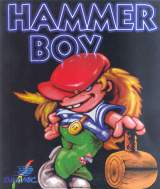