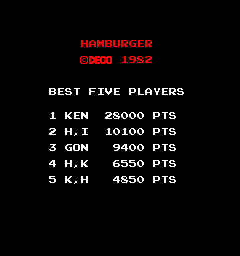 Hamburger is a platform game in which one or two players take on the role of burger chef 'Peter Pepper'. The chef must create a set number of burgers per level by collecting the separate ingredients needed to make each one (two pieces of bun, the burger itself and/or a garnish, such as lettuce or cheese).

Each screen is made up of platforms joined by connecting ladders. At the bottom of the screen are a number of empty plates while the burger ingredients lay across the platforms directly above the plates. The chef must walk across the entire width of the ingredients to make them drop to the platform below. A burger is only completed once all of its ingredients have been dropped onto the corresponding plate at the bottom of the screen.

The chef's efforts are hampered by the rogue ingredients that are constantly chasing him. They are called 'Mr. Hot Dog', 'Mr. Egg' and 'Mr. Pickle'. Any contact with them results in the loss of a life. The chef can temporarily freeze the enemies by throwing pepper at them. He only carries a limited amount of pepper but this can be replenished by collecting the bonus food items that randomly appear (ice cream cones, coffee, and fries). In addition to the pepper, any enemies located on a platform below the chef can be killed by dropping an available burger ingredient on top of them.