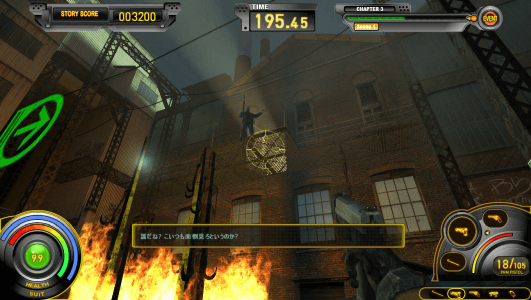 This game is based off the hit game on the PC and XBOX. Players control their movement by a combination of joysticks - one for each hand - and floor pedals. The console unit's screen is a HDTV widescreen liquid crystal display - the action unfolding from a traditional first-person shooter perspective.

There are 3 game modes :
* Story Mode - Players go through partial combat scenes from the original game. Each chapter has several mini levels with goals such as "Kill Combines" or "Find your way to the goal". Players are forced to go in a linear fashion, and neon-lit guiding arrows are placed in levels so that the players don't get lost. Players that complete a goal will be taken to next level. When players finish the all levels of the chapter, the game ends. If they have a NESYS card (sold separately), their progress can be saved on it and they can choose to play the new chapter the next time they play. It should be noted that there is no story-telling elements from the original game.

* Misson Mode - In this mode networked players work together toward a common goal. Example of goals include collecting gems, destroying Zombie spawning points, and escaping.

* Battle Mode - Mimics the deathmatch from the original game. Local and Networked players can battle it out against each other up to 4 vs 4 teams.

Up to 8 players - either local players or individuals in other networked arcades - can participate in the Battle and Mission modes.