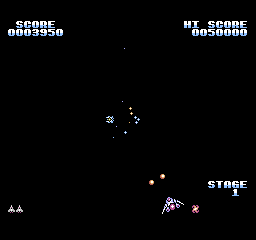 It's A.D. 2500 and mankind has penetrated the galaxy's fringes, establishing colonies of peace from Mercury to Pluto. Suddenly, the tranquility of the Milky Way erupts into a frothing fury as armadas of alien deathships swarm into our solar system like killer bees preying on an innocent bystander. No one is spared. Even beloved Mother Earth is stung. These vicious cosmic Visigoths are war starved Gyrusians. And, led by the immortal Genghis Khan (whom they recruited from Mongolia centuries ago), they're out to trash civilization. With our galactic fleet flattened, you're the lone space cowboy who escaped the Gyruss shroud of doom. Now you must scorch through the galaxy, freeing planets by zapping endless enemy attacks with Neo-Bomb-Blastic Cannons and Ultra-Lazonic Phasers. So prepare for the fight of your life. And don't flinch, or else the entire universe will get pulverized!

Released on February 1989 in the USA.