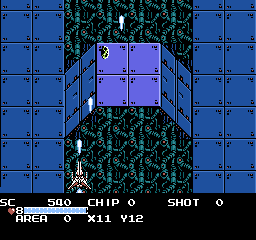 Guardic Gaiden is a shooter/action/adventure game by Compile. A large artificial planet called Naju is hurtling towards Earth and humanity is inclined to stop the upcoming destruction of their home world. Their only hope lies in a highly sophisticated aerobot guardian called Miria (codenamed System D.P), a female humanoid robot who can transform into a powerful spaceship. Her mission is to infiltrate Naju and to activate the large planet's self-destruct mechanism before it reaches the Earth. Guardic Gaiden begins as a traditional shooter where Miria, in her space-fighter mode, flies through narrow corridors, defeats waves of enemy ships and confront vile end-level bosses. Once the corridor's boss is vanquished, Miria transforms into her humanoid mode and the game switches to a traditional action/adventure overhead view. There, she must explore the surface of Naju, find twenty locked corridors, collect power-ups and gather important clues to move forward in the game. Most of the corridors are sealed at first and she must retrieve ten sign-coded keys (obtained by defeating bosses) to gain access to the different sections the game has on offer. Naju is incredibly vast and a map is available at anytime during the game to guide our heroine in her dangerous mission. Miria comes equipped with two weapons - a standard upgradeable laser-blaster and a wide array of secondary weapons (missiles, grenades, light saber, rotating fireballs, blue plasma and so forth). The latter are upgradeable (up to 3 times) and are limited by the amount of power chips Miria carries around. Power chips are at the core of the gameplay and symbolized by colored orbs (blue and red) scattered around the game. The are usually hidden inside small destructible pyramids along with other special items such as energy tanks, gun power cells, shields, gun power-ups and the almighty enemy erasers which annihilate every lifeforms on screen. Shops scattered throughout Naju are also convenient places to purchase upgrades in exchange of power ships. Guardic Gaiden features a password system to save the player's progress - however, collecting passwords is rather unusual here and players have to meet Rand? (blue and round creatures often seen in early Compile games and also known as Landers) to retrieve them.