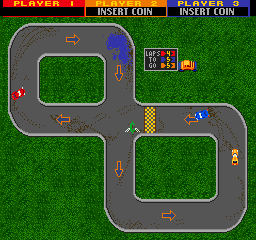 Grudge Match was released in June 1987.

Originally called 'Race For Pink', as in pink slips, the certificates of ownership at Bally Sente then realized that pink slips are not universal, so the name was changed. This represent the very last coin-op game designed by Owen Rubin and the end of his career. But unfortunately, this prototype was never finished / never released. In this prototype version, buying parts for your car was made VERY simple to speed up the game. In the final version, you would see your car in a garage up on a lift, and a garage full of parts you could 'buy' to make your car better. Better tires, better suspension, better brakes, better engine, better transmission. Owen was going to make the races longer, maybe 10 laps. And was going to add cops and traffic lights in the city. Run a red light, the cop chases you. If he bumped you, you stopped for a while to get a ticket! This would have been one GREAT driving game.