The object is to protect the flowers at each corner of the screen from enemies using a can of bug spray. Worms attack the top flowers while spiders approach the bottom flowers. The game ends when three flowers have been eaten. 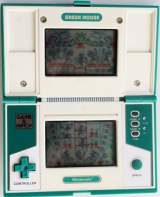 A microgame in the Nintendo DS game WarioWare D.I.Ys titled Greenhouse is based on the Game & Watch game.