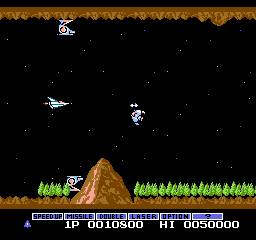 Because of obvious technical limitations, the Famicom version shows major differences with the original arcade game. Konami gladly sacrificed some of the game's original features as long as the gameplay was unaffected (which is perfectly fair). First of all the size of the big-core ships has been considerably reduced. Then the Vic Viper can only carry two options at the same time whereas the arcade allowed four. Finally, the stages that could scroll up and down (such as the Stone Hedge and Moai levels) are locked and the 'frame-looking' enemy before the final boss was omitted.

* Classic Konami code : press Start during the game, then press Up(x2), Down(x2), Left, Right, Left, Right, B, A, Start. This code equips you with two Missiles, two options and a force field barrier.

* Secret message : during the title screen hold B+A, then reset the machine and return in the game (always with B+A) to get the following message : KONAMI ONE, GRADIUS ONE.

* Level skip : destroy the ship that appears at the end of each level within five seconds to skip the next level.