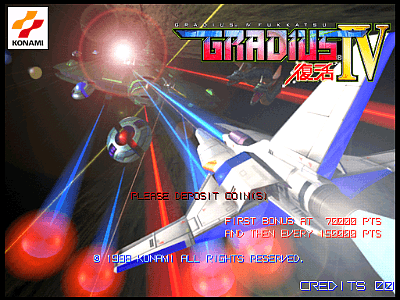 Gradius IV is a horizontally-scrolling shoot-em-up in which the doomsday planet of Bacterian is now long-forgotten and Planet Gradius enjoys peace and prosperity. Then suddenly, without warning, a massive attack force appears and quickly overwhelms the Gradius Defense Forces. When it seems that all hope is lost, a lone fighter screams across the sky and the battle for freedom is joined once more.

As with previous games in the series (with the exception of "Salamander") Gradius IV features a power-up system based on a selection meter at the bottom of the screen called a 'power meter', that enables players to buy weapons and upgrades. To achieve this, players must destroy special individual enemies - usually red in colour - or enemy waves that then drop orange capsules. These can be collected and used to upgrade the Viper's weapons. Each collected capsule advances the power meter by one step. Players can activate the highlighted item at any point, after which the power meter resets.

Gradius IV features nine stages, with a large alien boss or ship waiting at the end of each. The end-of-game boss is the giant head of Gofer; the alien Being intent on controlling all life in the galaxy.