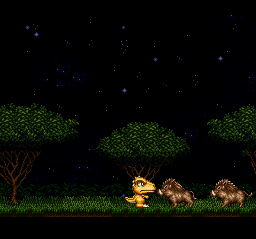 Gon is an action/platform game by Bandai. In this prehistoric tale, set in some time period prior to the arrival of humans, a strange dinosaur-like creature called Gon roams around the world and goes where he pleases. The little creature is probably the last dinosaur alive, which probably explains his choleric nature and fiery personality. Throughout the game, Gon meets all kind of animals and every single one of them make him angry and snarling. Especially the ones who steal his food or boot him out of a nice, warm napping place. In each area, the goal of the game is to track down the local bully and to teach him a lesson. Each level is divided into several sub-stages, each interlinked with tunnels and other passageways. Sometimes exits are blocked and Gon has to defeat all the animals from a given area to unlock them or use his brain (or head I should say) to dig tunnels and figure out ways to use his surrounding to his advantage. Some stages switch to a 3D view and have our dinosaur race across various landscapes and jump over obstacles such as large logs or bottomless pits. Gon has a plethora of moves to master - he can bite, swipe with his tail, run and launch head butt attacks, jump in the air and fly for a short amount of time by vigorously flapping his short arms. Gon also has a special giant-bite attack that he can use at times. Interestingly there is no life or health bar in the game - as Gon takes more damage, he grows increasingly angry and soon his adrenaline level passes the pressure point and turns him into an uncontrollable wrath. At this point, Gon's anger destroys our planet and the game is effectively over. Thankfully, happy Gon-heads are hidden in each stage and bring Gon's temper back to his normal state. The game features seven large areas and a simple four-digit password system allows Gon to pick up his adventure where he left off.

The game is based on Masashi Tanaka's popular comic book series originally published in 1991.