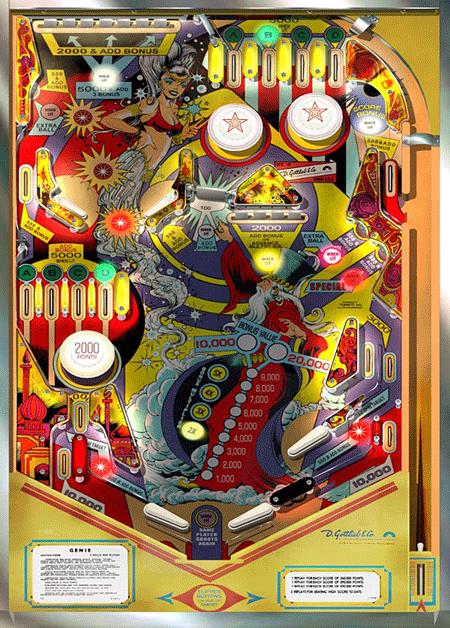 This addictive table was designed with well thought-out objectives and features 5 flippers. Two flippers in the upper left corner create a mini playfield.

Considered by many to be the best wide-body table of its era and possibly of all-time, and a true Gottlieb classic.

Genie is all about building up and scoring a huge bonus. Firs, you need to concentrate on getting the bonus up to 20,000. Completing the red drop-targets lights the Special target, resets the red and white drop targets, scores 10,000 points, and lights the white drop targets for increased scoring. Not only does this mean you'll be getting a nice size bonus, but you'll also activate the ball trap. When the ball trap is active, you can receive the full bonus before you lose a ball. There are many areas that add to your bonus. Such as the rollovers, as well as the targets and even the spinner - all add to your bonus when lit.