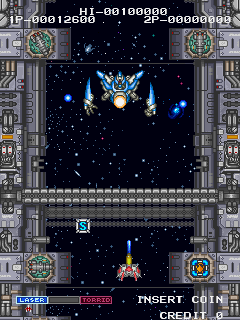 Galmedes is a vertical scrolling shooter arcade game released only in Japan.. The ship has two types of attack: the standard firing weapon and a charge attack. Once the player collects all three weapons, the player can select any of those weapons during combat.

On the alien planet of Gaston, a dictator named Gildy rose to absolute power. Gildy started a plan to take over his home solar system, but upon doing so, he decided to spread his influence. After conquering his home galaxy, the next galaxy that Gildy planned on invading was the Galmedes Galaxy. In response, the unified forces of the planets of the Galmedes Galaxy have created a powerful space fighter known as the LEPTON (Launched Electro-Projectile Thermal Osmotic Nullifier). Two pilots, Foo and Bar, are selected to launch the LEPTON fighters against the invading Gastonian Forces.