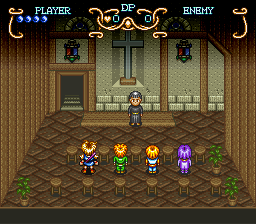 Gaia Gensouki is an action/Role Playing Game developed by Quintet and published by Enix. The game tells the story of a young boy called Tim (aka Will) and his adventures that follow after he goes on a journey with his father to the Tower Of Babel. There, things don't really go according to plans and the boy wakes up later, in his house, with seemingly no memories of the events and no trace of his father. Tim decides to embark on the journey that will take him all around the world of Gaia and make new friends such as the cute Karen (aka Kara) and her pet pig and a mysterious dandelion girl called Lilly. Tim will learn about many mysteries, about the ominous approaching comet that may destroy the world, about his own psychic powers and how they in fact relate to Gaia. He will also learn about Freedan and Shadow, two of his alter-ego forms, and how to control and use their powers. Gaia Gens?ki is an action/RPG and the gameplay is closer to Zelda than other traditional RPGs such as Final Fantasy, thus the action doesn't stop when the player encounters an opponent. Will levels up if he manages to defeat all the monsters and other creatures found in each area and this task is made easier with the monster finder radar he carries around. Interestingly, most of the areas in the game actually exist on Earth and Tim visits locations such as the Great Wall of China, Inca ruins or the popular Nazca lines.