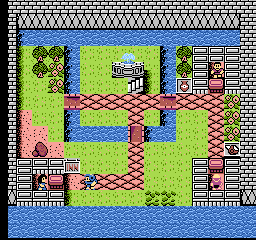 Fuzzical Fighter is a side scrolling shooter with mild RPG elements by Sigma. The magical planet of Funny is in danger - the Dimensional Stone, an ancient and mysterious artifact that maintains the balance of the world, has been stolen. In a last ditch effort, the king decides to send his best pilot to thwart the attack. Mark, the brilliant pilot of the Fuzzical Fighter, accepts the challenge and is eager to recover the stolen property. However, Fuzzical Fighter is not your typical side-scrolling shooter. The game is broken into two main phases that can be roughly described as a 'building phase' (where the player customizes the ship) and an 'attack phase' (which features traditional side-scrolling shooting action). Mark starts his adventure in a small town where he can purchase all kind of new engine parts, shield components and weapons (called 'Shots') for the ship, as well as sell old gears. Special items are also available and come in different shapes and forms (such as health, extra maximum health, extra magic and so forth). But towns have a lot more to offer and each kingdom has its own king and simple subplot (but they don't really affect the action phases). Mark can meet the king and gather information about his mission, talk to his adviser to attain the current level's password or stay at the Inn to fully restore his health. Once the player is ready for action, he can visit the Inn to enter the next action phase (or buy his way to any level in the game). Action phases are fairly straight forward with countless waves of enemy ships and vile bosses to do battle with for money. Interestingly, the player can access a menu screen and change the ship's configuration at anytime, like the ability to switch weapons, use items or activate the ships's autopilot. The FAPS, as it is called, is an option to place the ship in autopilot mode (called 'Fuzzy' mode) and let it fly by itself (it comes with two pre-defined commands called Attack and Defense). Finally, the ship can also use magic spells - although powerful, they consume the player's Magic Powers and must be used with great care. Fuzzical Fighter consists of eight levels and uses a simple four digit password system to save the player's progress.