Fury of the Furries

Fury of the Furries is a platform/puzzler game developed by Kalisto and published by Mindscape.

A group of Tinies return to their home planet after a voyage in space. They find out that their beautiful home has been turned into a horrid place by The Wicked One, a dark and cunning Tiny with a giant fang jutting from its mouth. The player controls a Tiny, who must defeat The Wicked One, who has captured the king and turned all the Tinies into mindless monsters by using a device simply referred to as The Machine. 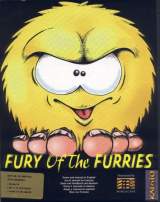