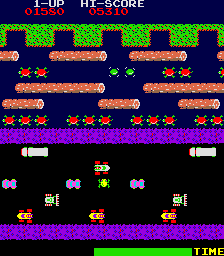 Frogger is a one or two-player game in which players must overcome a number of hazards to safely guide the green amphibian from the bottom of the screen to one of five home bases situated at the top of the screen.

The lower half of the screen consists of a bi-directional flow of traffic moving across five lanes. To navigate across the road safely, Frogger's hops must be timed to avoid the vehicles, which include buses, civilian traffic and racing cars, with different vehicle types moving at different speeds. As well as being able to hop vertically, Frogger can also move left and right, allowing him to move with the flow of traffic.

The upper half of the screen consists of a fast-flowing river populated with logs, crocodiles and turtles. Frogger will drown if he has any contact with the water and these act as platforms onto which Frogger can hop. He must be careful to avoid contact with crocodiles' snapping jaws, however and some of the turtles will periodically dive below the water's surface, drowning Frogger. Frogger will also die if he is on a log, turtle or crocodile when it reaches the edge of the screen.

A round is completed once five frogs have been guided safely home, after which the next round begins with an increased level of difficulty. This includes faster-moving vehicles on the road section and new, deadly hazards on the river section, including crocodiles, otters and snakes.