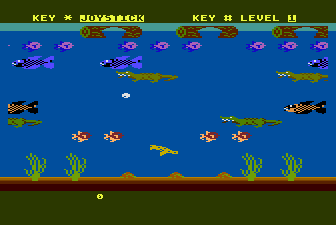 The objective of the game is to get Frogger safely into the required number of home berths. Home berths are dispersed among the three different screens: underwater, on the water's surface, and in the air. In Level 1, for instance, there are five home berths; three in the underwater screen, and one each in the surface and air screens. Frogger need not reach any of the home berths in one screen before he goes to the next. As you'll see, Frogger may travel from one screen to another without loss of life. To advance to a higher difficulty, however, Frogger must fill all open berths in each of the three screens.

There are bonus points to be had in each screen, too. But you'll collect them only if you take Frogger to an open berth on that same sreen!