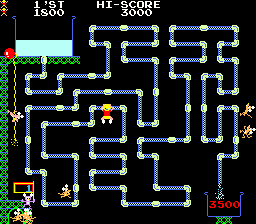 You play the plumber Frisky Tom who is trying to get water from the top tank to a shower tank below. Mice interfere with your plans by stealing pipes blowing-up pipes and by biting Tom. If Tom fills enough water the shower tank, he advances to the next level. Depending upon how much water is in the tank, a woman in a bath tub will appear as an interlude between levels.