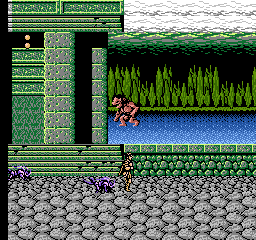 For years the monster lay in the grave, and the villagers went peacefully about their business trying to forget the horrible nightmare days when HE had spread terror throughout the countryside. For years the sun seemed to shine brighter and the crops grew taller than anyone could ever remember. Surely, their troubles were far behind them, and life was one blissful long walk through paradise. But, their wonderful world would be shattered in one mighty flash from the heavens. For lightning had struck the old tombstone that lay battered and overgrown with weeds in a dark corner of the ancient cemetary. And just as fiendish life had once been given to the dead, it would be given again. First a twitch of a finger, a flutter of a heartbeat, then a powerful surge of energy to the twisted criminal brain that so long ago had terrorized the land in the powerful body of the hideous monster. The horror was about to begin again... Frankenstein had risen from the dead!