Baldur's Gate is a fantasy role-playing video game developed by BioWare and published in 1998 by Interplay Entertainment.

The game's story focuses on players controlling a protagonist of their own creation who finds themselves travelling across the Sword Coast alongside a party of companions, to unravel the mystery surrounding a sudden iron crisis affecting the region and attempting to discover the culprits behind it, while uncovering dark secrets about their origins and dealing with attempts on their life. 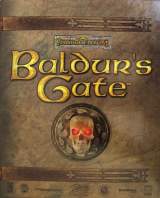