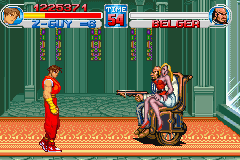 CLASSIC ARCADE ACTION ON THE RUN!

There's trouble in Metro City. The members of the Mad Gear Gang have kidnapped the mayor's daughter Jessica and the clock is ticking. The mayor, an ex-street fighter himself, calls in the big guns to help, enlisting the iron fist team of Cody and Guy. Now, it's a race against time to scour the city, defeat an army of the Mad Gear Gang's minions, and rescue Jessica before it's too late!

Final Fight One for Game Boy Advance was released on May 25, 2001 in Japan.

Features Haggar, Cody, and Guy and the Industrial Area (as well as Rolento) that was missing in the Super Famicom version.

With a link cable, the game can also be played cooperatively with 2 players and unlimited continues instead of just 4 credits in 1 player mode.

Prior to each boss battle, there are dialogue scenes now, and the Street Fighter Zero versions of Guy and Cody are unlockable characters.

Players can select the same character, and there are other unlockable features such as extra costume color palettes.

The items of Final Fight Guy, such as extra lives and invincibility are also featured. Enemy placement is also the same as Final Fight Guy, but more than three enemies can be seen on the screen at the same time.

Transition sequences were also restored, but some were still not present while others were slightly altered.

When you exit the Options Mode and return to the Mode Select Screen, the Battle Point Screen is displayed. Your Battle Points are calculated by the cumulative number of enemies you have defeated. When you defeat a certain number of enemies, a hidden secret will be unlocked, as listed below:

Once you reach 2,000 points, you have unlocked everything. The maximum number the screen can display is 9,999.