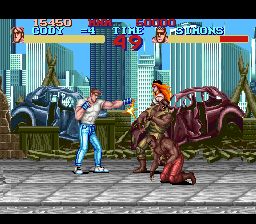 Final Fight is a side scrolling beat'm up and is the conversion by Capcom of their own arcade game originally released in 1989. The game features two playable characters - the heavy built but slow former champion wrestler Mike Haggar and the more agile and fast martial art expert Joe Cody. Here is the first difference that would strike players used to the arcade game - the third character from the original game, Guy, is nowhere to be seen. The Mad Gears gang has taken over Metro city and has kidnapped the daughter of the newly elected mayor, Mike Haggar. Jessica also happens to be Cody's girlfriend and our two heroes must fight their way through the city, beat-up dozens and dozens of vile gang members and finally take down the evil Belger, their murderous leader. Levels are built around locked-in sections, in which all opponents must be defeated to continue. The game also includes several bonus stages such as a fun car-breaking exercise with an iron pipe. Each fighter can use simple fighting moves such as punches, jumps and pressing punch rapidly triggers powerful combos. They can also grab and throw, or hold on and hit their enemies. Finally, each fighter comes with a special attack when punch and jump are pressed simultaneously - this move drains some of their health energy but allows them to safely escape desperate situations. This Super Famicom port is a cut-down version of the original arcade game, the two players mode is gone as well as the fourth factory/Industrial stage.