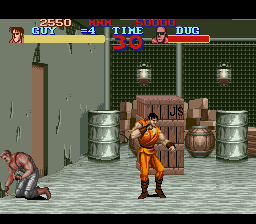 Final Fight Guy is a side-scrolling beat'em up by Capcom and based around their arcade game Final Fight. The action takes place in Metro City - Jessica, Haggar's daughter, has been kidnaped by the Mad Gear gang and our two heroes run to save her. The game is in all points identical to the first version except for the different opening and ending sequences. Two new power-ups are also available, a Jessica Doll giving our fighters a temporary invulnerability and special icons giving them an extra life.