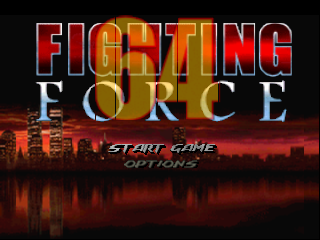 We recommend against destroying police cars with rocket launchers. Eidos and Crave, however, think it's a good way to begin their button mashing battle royal, Fighting Force 64.

There aren't any puzzles to solve or mazes to navigate in Fighting Force 64, just lots (and we mean lots!) of enemy roughnecks to beat into submission. Reminiscent of old school games like Double Dragon and Streets of Rage, this title takes the classic side scrolling brawler and hurls it into the third dimension.

You get to choose one of four different fighters, each with a unique head-bashing style and stash of special moves. Eidos and Core, who are known for creating strong female characters, have included two women as street fighting warriors. Mace and Alana may not look like bar room brawlers, but they can be even tougher than their male counterparts, Hawk and Smasher. All four participants are united in the common cause of defeating Dr. Dex Zeng, who is planning to release biological weapons to destroy the world. We get the feeling that he wasn't loved as a child.

Most people would prefer to live rather than be destroyed by man-eating microbes, but Dr. Zeng somehow managed to gather an army of thugs, punks, and shady characters to stand in your way. These folks are obviously not the brightest bulbs on the block, so they keep coming at you even when they've seen hundreds of their buddies go down. If you want to get to the diabolical Dr. Zeng, you'll have to take down more hooligans than Charles Bronson.

3D environments give a new level of depth to the stage fighting genre, and the battle areas found in Fighting Force 64 are varied and interesting. You'll be kicking tail in elevators, subway cars, office buildings, and that's before you get to the high tech military installations of Dr. Zeng's headquarters. You have complete freedom of movement within these settings, which allows for more strategic planning than in side-scrolling battles.

To succeed in Fighting Force 64, you'll have to fight dirty. Honor is just fine and dandy, but you're not going to stop Dr. Zeng lying face-down in the street. By punching and kicking different things in the environments, you'll find an abundance of weapons, cash, and energy. For example, you can knock a tire off of a car by repeatedly kicking it, and then use it to take out a few enemies. Experimentation is the key to finding these makeshift weapons, so try to destroy everything. If you spot an enemy carrying a knife or a gun, attack that thug before any other enemies on the screen. The thug will normally drop the weapon, which gives you the opportunity to snatch it up and beat 'em at their own game.

There are two multipath junctions found in the game, and the number of available routes depends on your score. You can rack up points by pounding on the bad guys, but you can earn even more points by smashing objects and collecting the cash that falls to the floor. You can make your way through the game fairly quickly, but to see all of the areas you'll have to play through more than once. How could you live with yourself knowing that you've let some of Dr. Zeng's slackers slip through your fingers?

If you can't handle the swarming mass of enemies on your own, don't give up. You and a friend can take on the low-lives together in the 2 player cooperative mode. Even with the addition of a second player, you're still waaaaay outnumbered. You'll have to fight just as hard to be sure that you're not overwhelmed, but two players can usually cover enough ground to quickly destroy every breakable object on the screen.

With 25 3-D levels, 5 boss stages, and multiple paths, Fighting Force 64 gives players much more than the classic face-smashing fighting games of the past. If you approach Fighting Force expecting cerebral challenges and an original plot, you'll most likely be disappointed. If you approach the game expecting to deliver a few knuckle sandwiches, then you'll find what you're looking for.