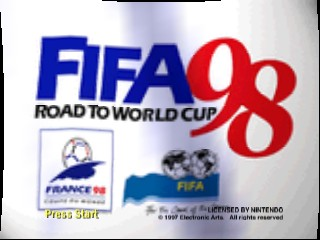 FIFA '98 from EA Sports is much more than just a simple roster and team upgrade for FIFA 64, it's almost an entirely new game. Nearly every aspect of the game has been improved; enough to make this one of the best sports games yet for the Nintendo 64.

You'll notice graphical improvment the moment the players take the field. Players have even more animations than in the previous FIFA game, and they are smoother and more realistic. Their heads turn to look at the ball as it comes to them, then towards the goal once they have control. Diving headers, bicycle kicks and Cruyff turn fakes are just a few of the flashy field moves in the game. Goalies can actually punch the ball to save a goal. (You'll only notice some of these details if you watch instant replays.)

The lighting in the game has been tweaked too, so the pitch looks brighter when it's sunny out, and gloomy only when it's raining or snowing (unlike all the time in FIFA 64). On sunny days, you'll also see a sun-generated, stark single shadow on your player, but in night games, the players will have multiple shadows from the stadium lighting. It's attention to graphical detail like this that make FIFA '98 seem like a more polished game than the original.

But the detail isn't all in the graphics. FIFA '98 sports teams, players and options galore. All the real international World Cup Confederations (CONMEBOL, OFC, AFC, UEFA, CONCACAF, CAF) are in the game as well as the most famous national leagues from around the world (leagues from England, Italy, Brazil, France, Spain, Netherlands, Malaysia, Germany, Scotland and Sweden all mirror reality, while the US national league is fictional). Not only are all the teams in each league present and accounted for, but most teams also have accurate rosters of real players. If you don't like the player ratings (there are 13 different skill ratings), you can also go in and redistribute a player's attribute points, change his face, hair style and color, and uniform number. In addition, you can change the team's colors for both their home and away jersey. Player transfers are also possible, and each team has a budget that won't allow you to make uneven trades. A standard Controller Pak can save more changes than you'll probably care to make, and can also save two seasons in progress.

FIFA '98's new gameplay feels slightly more arcade-like than its predecessor, but retains a lot of realism. Passing is crisp and accurate, and seems to be the ability most affected by a player's rating. If you time it right, you can pass or shoot right between the opposing player's legs. Not surprisingly, shooting accurately is the toughest thing to master, but once you've got the hang of it, spectacular banana kicks, chips over the keeper and powerful strikes to the corners of the net will become second nature. In addition to the good on-field control, you can manage the playing style of your team on a more strategic level by customizing the team's formation or turning up each individual player's aggression levels.

Despite all the improvements, though, FIFA '98 does have a few flaws that make it just a step below perfect. The first one is minor -- the game has the standard convoluted EA Sports game menu system, which with all the possible choices, makes setting up the game's detailed options a little frustrating at first. The second and more important flaw, though, is the game's artificial intelligence. The computer opponent is not very creative, and doesn't seem particularly aggressive. When the lowly Maldives Island national team can play the international soccer juggernaut of Germany to a scoreless tie, there's something wrong with the balance. Of course, in a multi-player game, this is not a factor, and like most sports games this is where FIFA '98 excels.

Overall, FIFA '98 is a surprisingly impressive upgrade to EA's soccer franchise. Rather than just adding new rosters and teams, EA has significantly improved the game in many areas. Although Konami's International Superstar Soccer used to be unquestionably the best N64 soccer game, FIFA '98 now makes ISS's postition atop the soccer heap up for debate. In fact, with all its options and detail, FIFA '98 is probably the better choice for a player who likes sim-like detail in their sports games. ISS still probably holds a slight advantage as a pure arcade-style soccer game.