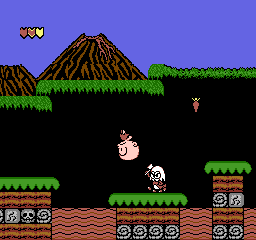 FC Genjin is an action game by Hudson Soft, and conversion of PC Genjin, first episode from the wacky prehistoric series that brought what was probably the first major caveman action video game protagonist. The moon princess has been kidnapped, yet again, by King Tama III (aka King Drool), and the little caveman, armed with his signature stone head, goes on a long journey through Dinosaur Land to save her. Our hero can walk, jump and head-butt his enemies. He can also trigger mid-air spins and land head first on his foes for devastating results. Other than that, the caveman has a plethora of unique techniques - he can swim up waterfalls, climb trees and bite walls. He can also get super charged - hunks of meat give him significant power boosts, allowing him to send pile-diver earthquake shocks across the screen, or to become invincible for a short amount of time. Sleeping Bani-Bana flowers are scattered all across Dinosaur Land and provide a large array of special items - fruits (more life), small and big hearts or meat. Other items, such as earth containers and extra lives are also located throughout the game. Finally, special and rare small flowers transport the player to special bonus zones, or to secret passages filled with all kind of items. FC Genjin consists of five large areas made up of several sub-stages each.

* Stage select and sound test menu: As the title screen scrolls up, hold A, B, Select, Start, Down and Left. A special menu should appear right after the 'Push Start Button' message appears (picture on the right). There, press Left or Right to cycle through several areas from the game (levels, bonus stages, ending and so forth...), and press Up to start. Press Select to access the sound menu - press A or B to pick a different sound, and Start to play it. Press Select again to return to the stage select menu.