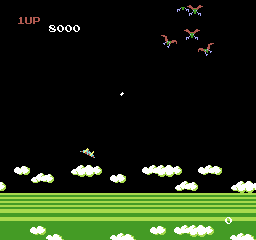 Exerion is a top-down vertical shooter by Jaleco and conversion of an arcade game originally released in 1982. In the year 2991, the Zorni forces launched a surprise attack on planet Exerion and the Fighter EX is sent to counter the threat. Hordes of attacking ships appear from the top of the screen, periodically shooting or diving down towards the player's ship. The space fighter comes equipped with two weapons - a standard twin-shot and a rapid fire. Although the slow twin-shot comes in unlimited supply, the powerful rapid fire is limited to a certain amount of ammo (the remaining rapid shots are called 'charges' and are displayed at the bottom of the screen). As the player kills enemies, the amount of rapid fire shots slowly increases, and the core of the gameplay is to find the perfect balance between the slow but wide twin-shot, and the fast but limited rapid fire. Although the game borrows many elements from popular top-down shooters available the time (such as Galaxian or Phoenix), it separates itself from its peers for a number of reasons. First of all, the background features a pseudo perspective and a 3D/Parallax scrolling that smoothly transitions from one area to the next. Then the ship has considerable inertia, allowing the player to execute complex evasive maneuvers with some practice, or to plunge to his doom. Although Exerion indefinitively loops, it includes four types of levels (mountains, Clouds, City and Pyramids), each consisting of several enemy waves. Every fifth stage is a bonus area where the player takes down as many alien ships as possible in order to no only boost his score, but also to increase his rapid shot charge.