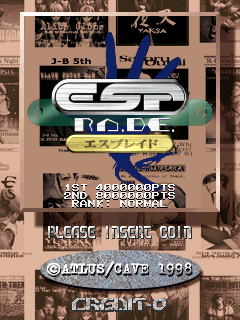 A vertically scrolling shoot'em up game.

* Stage Edit : Select your character with a specific button to choose the order of the 3 first stages :

* ESP Ra.de. weapons :
1) Shot : your main shot is fired with the A button, and is the basic fire. If you just tap, the character will move at maximum speed: if you hold down the button, the character will slow down, about 20% slower. When you use the normal shot and have a chain going, destroying enemies while the timer is still active will grant you the multiplied score, i.e. if you have a x15 multiplier active and you destroy enemies, they all will be worth their value x15.You need to take four big "P" power-ups to be fully powered, or 4/8/12/16 (in this order) small "P" power-ups.
2) Secondary Shoot : actually the most important of the two basic weapons: Beside making a lot of damage, it triggers multipliers for your basic points. It works in this way: if you shoot a blast of the secondary shot and hit an enemy, you can land on it from 1 to 15 energy bars (the bar is located at the bottom of the screen, on the player's side of course). If you destroy the hit enemy with the main shot, you will also trigger a timer for your multiplier: depending on enemy's size, you can get from 0.5 to 2 seconds to continue the chain and keep having the said multiplier on score. Now, the only way to replenish said timer is to collect the bonus cubes. These cubes are released by larger (i.e. that take more hits to explode) enemies and by engulfing bullets into explosions: if this happens, every bullet will be turned into a bonus cube. Now, when you land a secondary attack on an enemy and then destroy it with the main weapon, you will trigger the multiplier bonus: said multiplier is based on the level of energy that lands on the enemy. For instance, if you land a full level 15 secondary attack on an enemy and then destroy it, you will trigger a x16 multiplier : the basic formula is Energy Bar+1=Multiplier Value, or EB+1=MV
The amount of energy in stock depends on your power level : you start at 7/15, then increase by +2 per full power-up. Now, one final note on the bonus cubes: every cube gives you back 0.1 seconds on your multiplier timer. The maximum timer, however, can never be higher than 2 seconds. Bonus cubes are also (obviously) worth points, hence the name: every bonus cube is worth 100 points x the MV, so big showers of cubes are worth a lot of points and will maintain the multiplier going.
3) Psychic bomb : is your limited weapon to get rid of enemies once you don't know what to do. It basically works in this way: you have a big energy bar on the right of the EB, which tells you how much energy you have to use on the bomb. Once you push the C button, you will release a quick blast of energy which will damage hit enemies: unlike the typical smart bomb, it won't clear the screen of all dangers. However, if you hold down the C button, you will create an aura of invincibility, and accumulate more power: this is useful to release more powerful blasts. Once you hold down the button, all bullets going against your barrier turn into bonus cubes, so you can also get back some of them. You can use up to half of the bar for one huge blast (holding down the button will consume your energy).
Now, the bonus cubes we've spoken about are also meant to make you replenish your bomb. How? Once you reach 200 cubes (counter is below the score), the game will be a bit harder and the bonus counter will flash. This also means that you will get more bullets to be cancelled into cubes with explosions, and thus a better change to keep a multiplier going.
Since we've spoken of replenishing the bomb energy, let's see how it works. Once you reach the 200 cubes value, if you don't have a full bomb bar, the bonus cubes will turn into energy bonuses. These will replenish your bomb bar, but the counter will turn quickly back to 0: once it's reset, you won't get any energy bonuses. Also, next time you will get energy bonuses will be at 300 cubes, then 400, then 500. Finally, if you die, your counter will be reduced at 75% of the stock, then 66%, then 50%, etc...